Spring Ahead of Adversaries 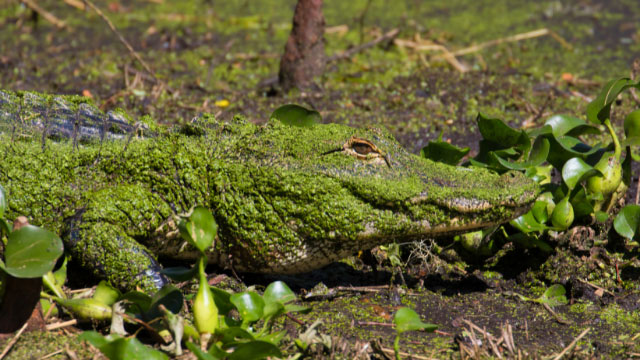 If the Log4Shell exploit wasn’t enough, a new zero day has been recently identified, Spring4Shell, a.k.a. CVE-2022-22965. Similar to Log4Shell, this new exploit can gain control of a victim computer within seconds, using simple HTTP requests.

Exploits like this are a perfect opportunity to demonstrate how deception technology, such as Fidelis Deception®, can serve not only as an early warning system for detecting zero-day threats, but can also provide valuable insights to network defenders into attacker activity.

For this blog, we created a decoy targeting the Spring4Shell vulnerability so we can gain intelligence about the attacker methods and learn how to stop attacks like these once-and-for all. We’ll show a step-by-step scenario of what these attacks look like and how easy they can take control and collect valuable information from the victim machine.

For all these attack attempts, our victim machine will be a Container-based Decoy. This new feature of Fidelis Deception version 9.5 allows users to spin up customized decoys quickly and easily with rich data in a container environment. All attacker activity is of course constantly monitored and analyzed, which enables network defenders to monitor the attack and collect the attacker’s tools and techniques.

Similarly, the following request enables the value of a different property in a different class to be changed

What this attack does is to manipulate the properties of the tomcat Access logs to generate a new log file, which will be an executable web-based shell.

The infection payload includes three HTTP requests that make a set of changes to create a new URL with an interactive shell. This URL can now be used to run commands on the victim machine.

In this blog, we will show the following attack steps:

Reconnaissance – Identifying whether the intended victim is vulnerable

The first step is to run a scan using nmap to reveal open ports related to the Spring4Shell vulnerability.

This detailed nmap scan returns the open ports and their respective protocols. In cases where the scan does not return the protocol that is used for each port, the adversary will try to directly access the port using a web browser.  In this example, we use Chrome network tools to identify the HTTP headers. 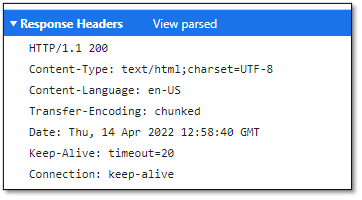 Several organizations published Proof of Concepts (PoCs) for this vulnerability. For our research, we used the following PoC to infect our test host- https://github.com/TheGejr/SpringShell, https://www.lunasec.io/docs/blog/spring-rce-vulnerabilities/

The goal of the infection is to create a new file on the web application “shell.jsp”. This will be an interactive JSP page that accepts a command from the user, executes it, and sends the output back to the user.

For our research, the JSP file below, was written to accept a ‘cmd’ parameter sent to it, execute the ‘cmd’ parameter, and return the input to the user in an HTTP response.

The infection includes three HTTP requests. The first request enables the creation of a new log file, the second request prepares the fake log file with the content an attacker wants, and the third request writes the file, wrapping it with “<%” and “%>” so it can later be executed.

Note that the second request includes the path to the file (/webapps/ROOT/, the name of the file (shell) and the suffix (.jsp).

Controlling the Machine and Fetching Data

Now that the “shell.jsp” file has been planted, the attacker can use it to run commands on the victim.

It can be used to run some interesting commands. For each step, the command to execute will be the parameter that is passed to the shell.

First, the attacker would run a simple echo command to verify the machine was properly infected.

The next command will be to check which user account was compromised and the associated privileges that were obtained on this victim machine.

Looking for hidden files in the /etc/ folder.

Finding documents throughout the file system.

The victim machine used here is a container-based decoy.

To build this specific Spring4Shell decoy, we used the dockerized vulnerable application created by LunaSec. https://github.com/lunasec-io/Spring4Shell-POC

Upload the docker image to the Deception system to use it as a Decoy container. In Fidelis Deception® version 9.5 you can create such a decoy in minutes.

Any access to a decoy is considered an actionable alert that should be prioritized and addressed immediately. That is because no one should interact with decoy assets for legitimate business reasons.

All alerts are grouped into a single conclusion that aggregates all activity from the attacker to the decoy. For the above attack scenarios, security teams will see alerts on the decoy across all attack phases – the reconnaissance, the infection, and the data fetching – when drilling down to the details.

The alerts on the reconnaissance and the infection phases are actionable to catch the attacker and quickly identify that an attack has occurred. The alerts on the data fetching phase will show valuable information on the attackers’ actions and intent once the system has been breached. 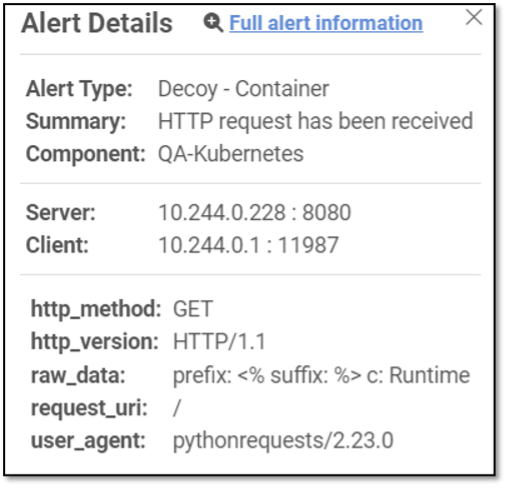 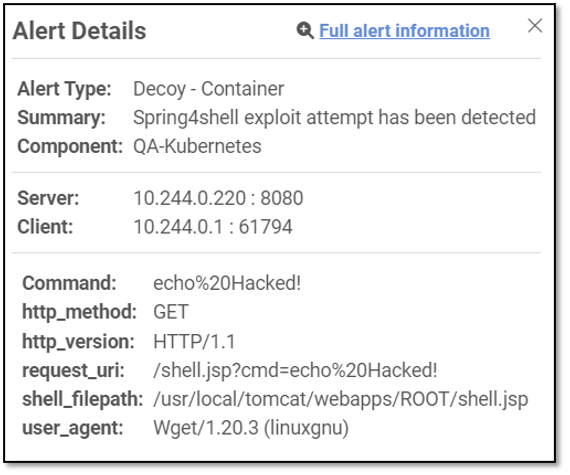 Be prepared for Attacks – Deploy Deception

As we have shown here, Fidelis Deception technologies are quite effective at quickly detecting zero-day threats and keeping cyber adversaries away from your data and assets. Deception technology from Fidelis Cybersecurity makes protecting your environment easy. Deploy out-of-the-box decoys on-premises, in the cloud or on containers. Simply create your own golden image decoy on a RealOS decoy or as part of a container image.

It’s just that easy to shift to proactive cyber defense.